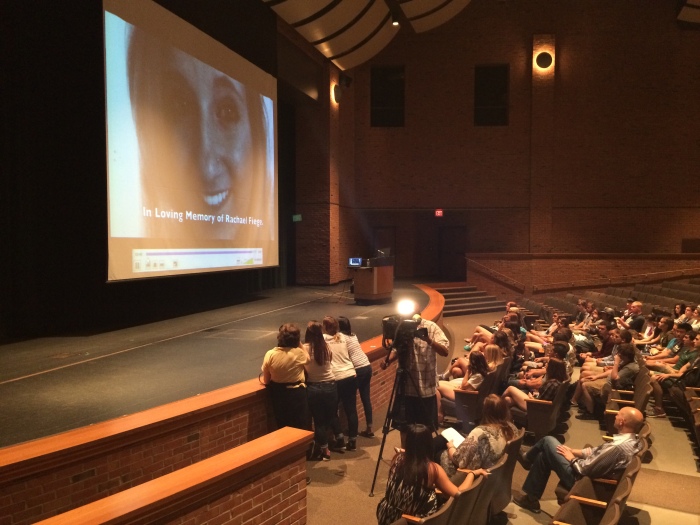 Thanks to everyone who participated in Rachael’s First Week today! We hope that our experiences we shared with you will help you in this exciting time starting college. We’re always here to help. If you have any questions at any time please feel free to contact us through the form below. You can be sure they will stay private.

These will be some of the best years of your life. Enjoy them and remember to watch out for each other.

Terez Malka is a 5th year EM/Peds resident at Indiana University School of Medicine. She will be a faculty member at Carolinas Medical Center, working in both the pediatric and adult emergency departments, starting in July. Check out Terez’s fantastic, previous post, The Challenges of Foster Care.

“Carl,” is a 10 year old boy diagnosed with autism at 18 months, and recently discharged from an inpatient psychiatric stay after a three week history of escalating violent behavior towards himself, schoolmates, and his parents and siblings. His parents are at their breaking point as they describe how he screams and hits himself, or anyone who comes near him, for hours at a time. He has not been able to attend school for weeks due to his violence towards classmates. He seemed to have some improvement during his brief hospitalization, but his behavior became unmanageable shortly after discharge home. They apologize for bringing him to the Emergency Department. “We just didn’t know where else to go.”

The following is directly paraphrased from “Carl’s” admission note:
“Father called [facility 1] and asked “what do we do?” and was told that they could not provide any assistance as patient was not followed in their outpatient program. Father states that he was told that patient was not a candidate for the outpatient program at the time of discharge. Father then called patient’s pediatrician, who advised them to call their behavioral pediatrician. At that number, they received a recorded message advising to contact the crisis center. At the crisis center, they were told that no providers were available who specialized in autism. At that point, family was afraid of patient’s behavior and had nowhere else to go, so presented to the Emergency Department.”

Most physicians who have cared for patients with psychiatric illness are well aware of the limitations and difficulties in obtaining timely and comprehensive care for our patients in crisis. Recent national events of violence perpetrated by those suffering from psychiatric illness highlight the devastating results when we are unable to provide them support, monitoring, and crisis respite they require. In my area of the country, pediatric patients requiring psychiatric admission can wait up to 72 or more hours in a general medical unit awaiting placement. These children may require phsyical or chemical restraint during that time period as the hospital floor is not fully equipped to support an agitated child, or one at risk of harming themselves or others. While the topic is widely discussed and lamented, no viable solutions seem to have come to light.

In our ED, Carl quickly requires physical restraint and then sedative medication in order to complete his exam and assessment. We are fortunate enough to have an in-house psychiatrist, who agrees that Carl represents an immediate threat to himself and others and requires inpatient psychiatric care. She sets off to secure an appropriate placement for Carl. But even after arriving at a large tertiary care pediatrics center, securing care for Carl is not seamless.
Below are direct quotes from the psychiatry resident’s phone notes:

“Facility 1: Discussed this patient with a social worker who stated that he will accept the patient. Received a call back and was told that the case was staffed with a non-physician, their administrator. Patient will be declined as he “reached maximum potential” from previous hospitalization that happened two weeks ago. I asked for definition of maximum potential, and was unable to get an answer.

Facility 2: Stated that all of their beds were full

Facility 3: Initially stated that they would accept the patient, then updated that they could not open up any new beds. Tomorrow there may be a bed if others are discharged.

Facility 4: Stated might take minimum 4 hours to staff, never heard back from them.

Facility 5: Physician declined patient as the patient would not be appropriate to their milieu.”

Right now, Carl is admitted on our general pediatric ward, restrained in a netted bed, with scheduled antipsychotic medications, awaiting placement. It has been 24 hours…

With mother nature giving us sunshine recently, May 1 was a perfect day for the Bike Safety Fair! The IUEM Advocacy group, with support from Women for Riley, Riley and Methodist Trauma Services, I-EMSC, Free Wheelin’ Community Bikes and Indy Cog, were able to help protect the noggins of 1300 kids! Check out how much fun we had in the process: